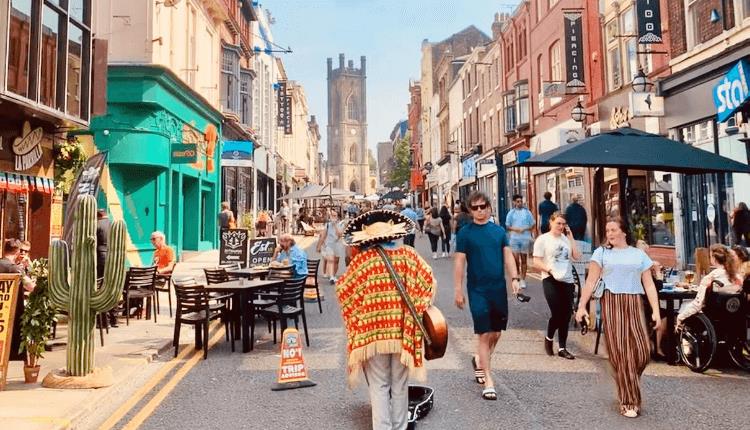 How Liverpool Without Walls opened up the streets

Our Board member and city centre resident Diana Heredia writes:

There are not many positive things that can be attributed to the coronavirus pandemic in 2020. For a few months some of us had a bit more time, better air quality in urban centres, a slower pace of life that left us to reflect on what is really important. Yet city centres as places to congregate suffered. They felt abandoned, eerie and at times dystopian. In the summer cities across the country had to try their best to attract back people who fled to local parks, gardens and the countryside in a bid to protect themselves against an invisible virus and all the fears and negative emotions associated with it.

Liverpool was no exception and two of the most characteristic streets were at the centre of a small, but valuable transformation that under different circumstances would have taken years to see through. Bold Street and Castle Street were quickly turned into pedestrian areas enabling local restaurants and cafés to extend their seating areas into the street, instantly drawing comparisons with the Mediterranean.

Being honest these comparisons don’t stand up to scrutiny, mainly because this temporary measure is just that: temporary. It becomes visible in the type of furniture the businesses were happy to purchase for something that might only be around for one summer as well as the barriers that can be easily removed when we are back to “normal”. The question is who will still want to go back? Only two years ago there was a public consultation on pedestrianising Bold Street and attending the event showed just how contentious this was.

On one side there were residents giddy with excitement at the thought of being able to use the whole width to shop and eat in one of the streets that make Liverpool truly feel cosmopolitan, without tripping over slower shoppers or confused tourist who changed directions or prams blocking the narrow pavement, making it a slightly frustrating experience if you were one of the people sure of where you wanted to go. On the other side there were some business owners worried about the loss of parking spaces which they felt would deter customers or who had concerns about the British weather, which could make outdoor seating unattractive.

The beauty of the temporary pedestrianisation is that it can be used as a trial and the last weeks have shown not only that bad weather isn’t much of a deterrent for people intent on eating out, but other “unexpected consequences”, to use the words of a worried resident who at the consultation couldn’t quite voice what they could be. To name just a few of the ones we witnessed:
• Suddenly restaurants that were not very accesible due to their small size or lack of level access become more accessible to a wider range of users (think wheelchairs and prams)
• Outside spaces invite smokers, which is a bane for nonsmokers, but again widens the audience
• The wider space invites people of different strolling speeds to avoid each other
• Cyclists are suddenly not quite as threatened by cars nor as much of a  threat to pedestrians
• The added greenery is very interesting despite its still small size
• The space invites to “zigzag” in a more natural way, the roadway doesn’t feel like a barrier that splits the street into two sides that need to be explored independently

We saw a few ad hoc performances and heard live music, which felt like a rare treat and in general felt that the street was more on a human scale. It was like an extension of our glorious Church Street. The lack of car parking did not once cross our minds and while it might be a concern for some, there are car parking options not too far away for people reliant on a vehicle.

All in all it is hard to say whether this enlivenment will be just as temporary as the project itself, but there is a sense that some streets lend themselves to pedestrianisation, especially in Liverpool. One can’t help but feel that not just residents and visitors, but also businesses would greatly benefit from slowing down these streets to walking pace and add them to the list of great pedestrian streets to visit around the world.

10 Best Pedestrian Streets around the World