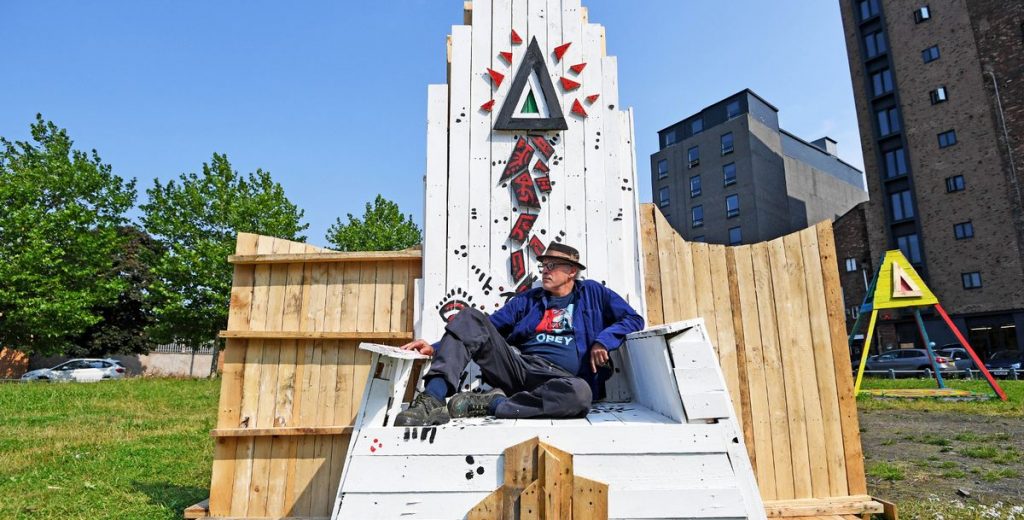 The rise and fall of Baltic Green

Do inclusive, green, outdoor spaces matter in Liverpool’s post Covid-19 summer? Looking at developments over the last few months in Liverpool they don’t. At least not in the sense in which a green outdoor space could offer a community of inner-city dwellers a playground to experiment with, or places to just sit and play, or even as a possibility for grass-roots initiatives to help shape their neighbourhood where the promises from developers and councillors offering Section 106 monies have all failed.

The green space in the Baltic Triangle – bounded by Bridgewater Street, Jamaica Street, Kitchen Street and St James Street – had been underused for the longest time. Its main use in the past, while the Baltic Triangle was mainly industrial, was as a fire-pit for Bonfire Night for residents from the neighbouring L1 community across the road. 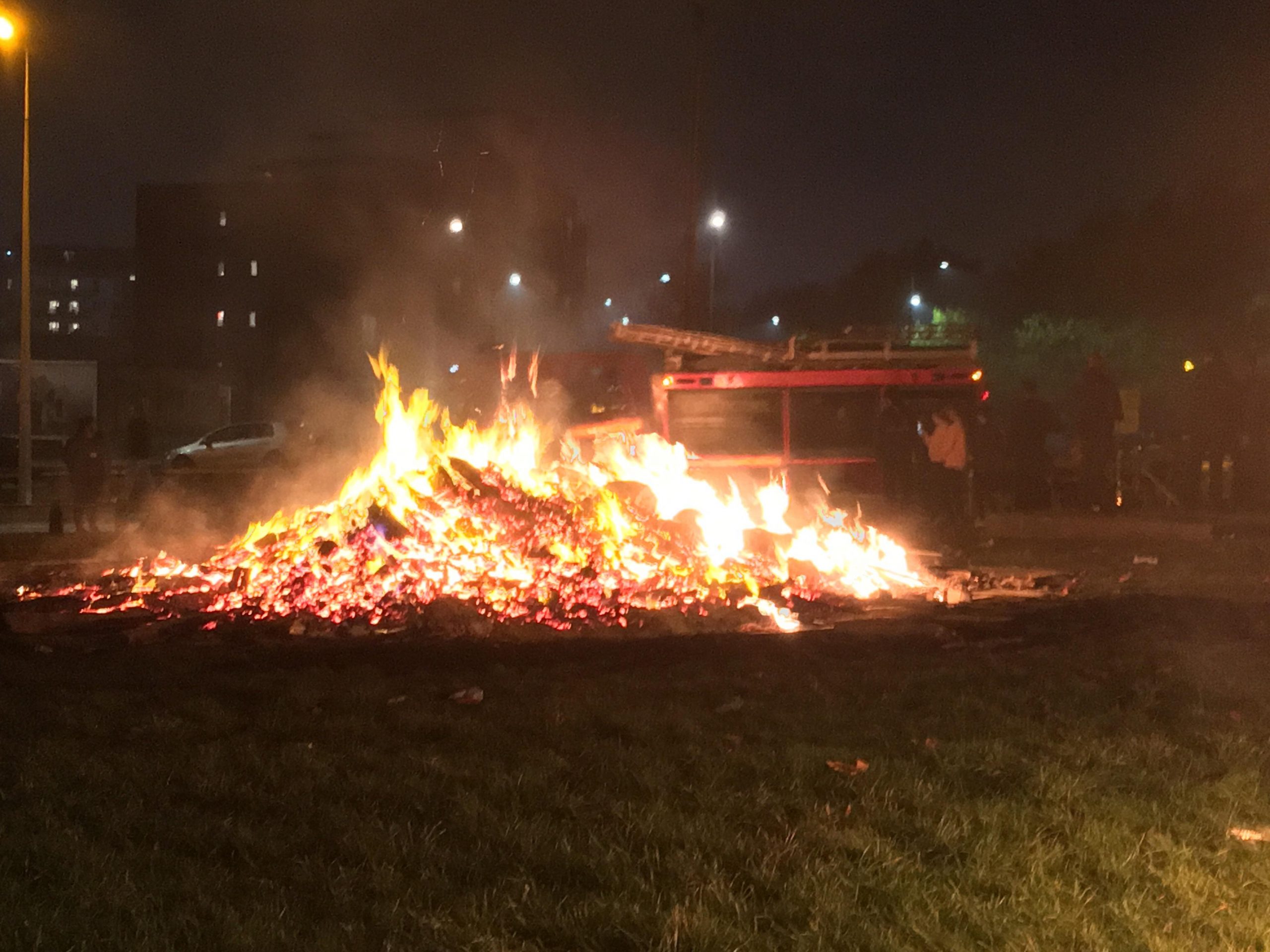 However, in more recent years members of the Baltic community and other residents showed a heightened interest to include this last remaining patch of green in the area into a usable park space for the newly residential neighbourhood.

Exciting Plans for the Baltic Green in 2020 Published by Baltic Triangle CIC 16.01.20 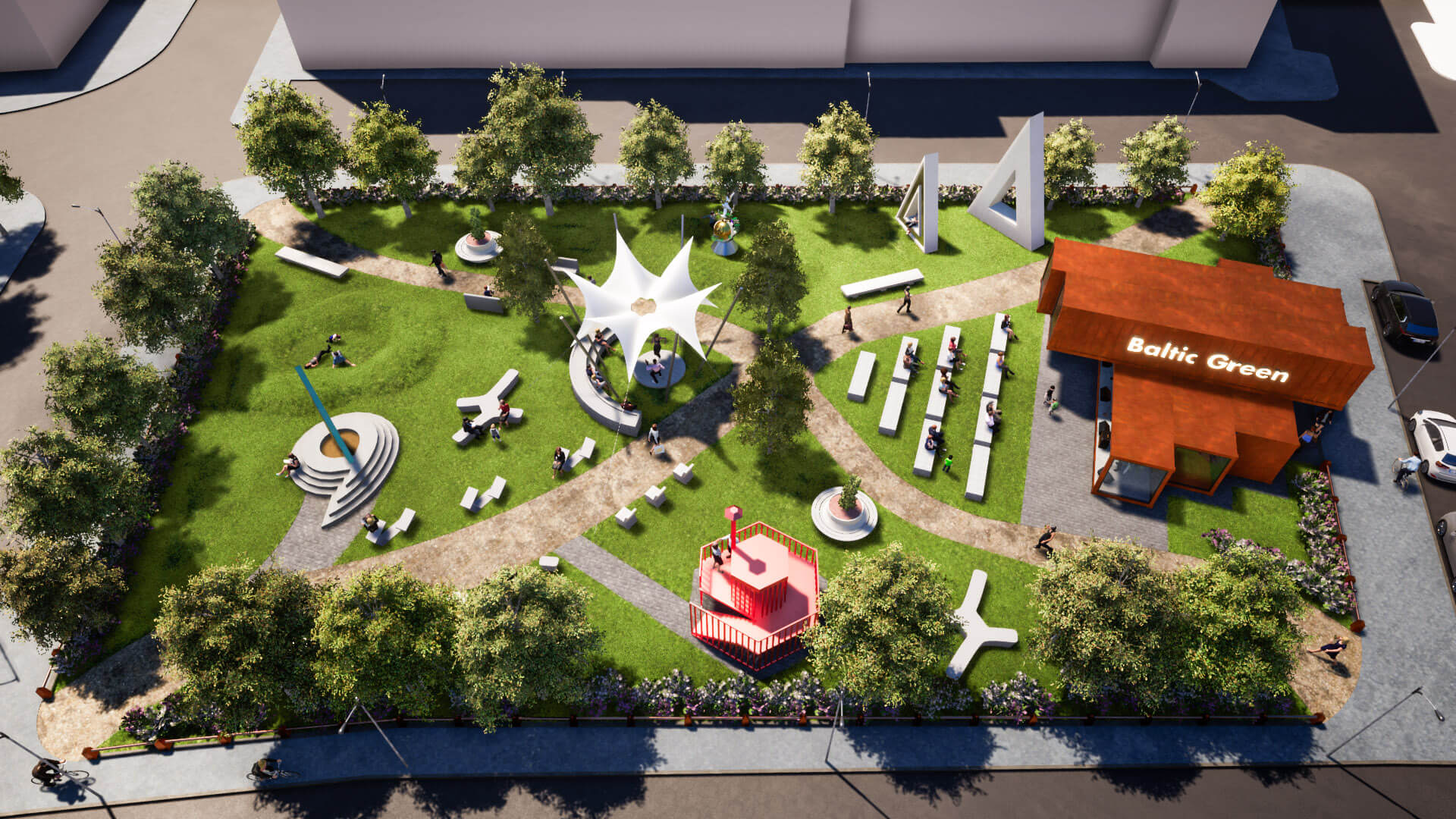 To add a bit of context it would help to know that new housing in the Baltic Triangle consists of flats with very limited or in many cases non-existent outside spaces. During the build, the promise of an urban park probably made up for the lack of balconies or landscaped courtyards. But neither the park pledge nor the Section 106 money supposedly allocated to the space ever materialised. Instead, a committed local artist and business owner and direct neighbour to the site did what nobody else had done before and showed civic responsibility and started working on a space that, before, might as well have been invisible.

Tristan Brady-Jacobs (see main image) managed to mobilise volunteers who poured their time, passion and resources into the little park-to-be. They planned, assembled, planted and constructed, and their work suddenly began attracting attention. The Baltic Green now offered a place for residents, contractors and visitors to sit, as well as for families in surrounding areas to engage with nature and an artistic community.

Liverpool’s newest park has thrones and a dragon built from pallets Published by the Echo 15.08.20 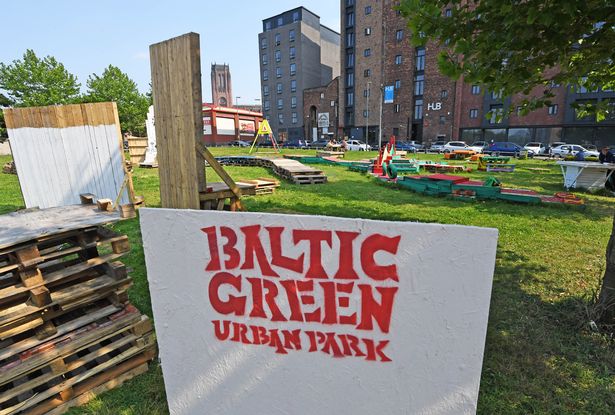 It is common that projects run by volunteers have ups and downs, teething problems and high and low points. This time of initiative can sometimes also breed resentment by other neighbours who want to freeze time and keep everything as it was or see the “newcomers” as invaders intent on disturbing the peace and quiet perceived before – even if the quiet was in fact a piece of derelict, council-owned land.

The realised ideas might not be to everyone’s taste, but then, if everyone is welcome, why not go and shape something yourself? And when the time frame is naturally limited, as it was in this case, there should be no fear of being stuck with anything forever.

Baltic Green Urban Park is a labour of love for local community   Published in Liverpool No!se 02.09.20 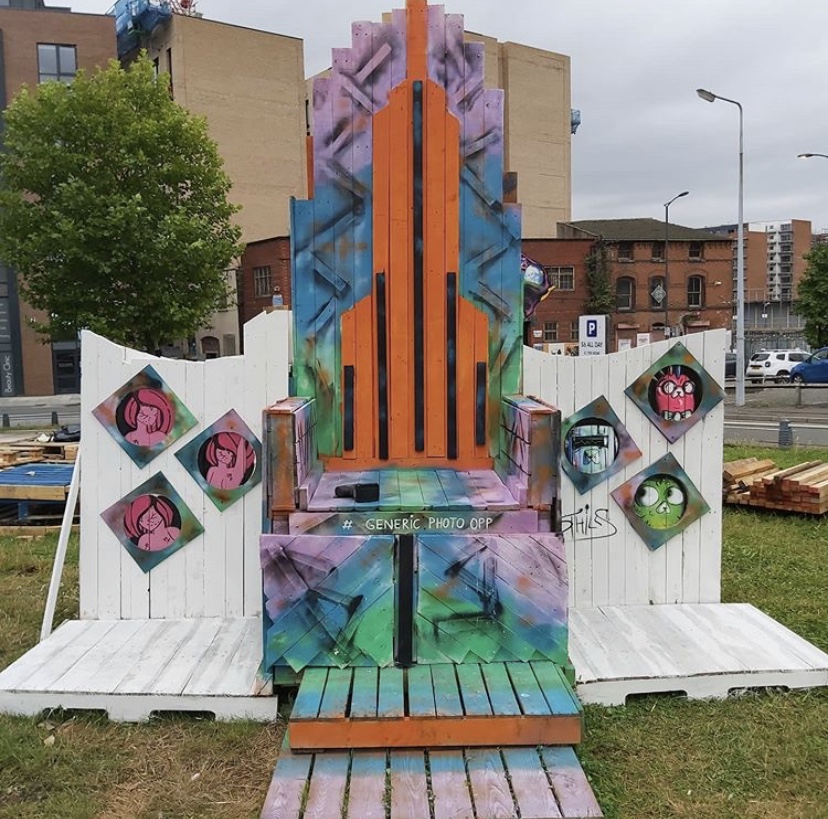 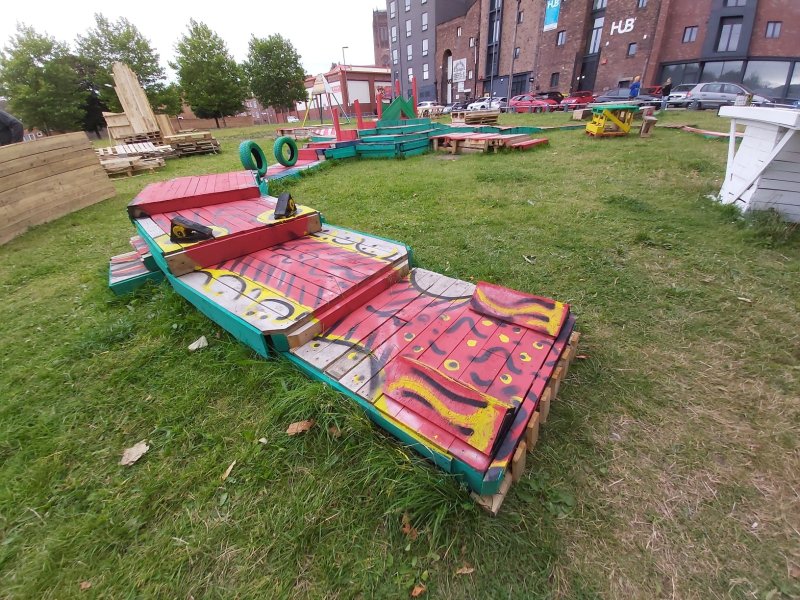 Also true for grass-root projects in public spaces is that if they lack support from local councils the chances of success will be slim. In the case of the Baltic Green the “help” from the council showed few signs of a constructive approach.

When pest control officers found rats on the green, it was decided the structures should be removed. Communication was vague and deficient. The pallet structures were hastily demolished and left, in a crumpled mess, on site. And just why the bulldozers had to demolish the planting – big parts of it, charitable donations – in a year in which most agree we need more not less connection to nature, is beyond reasonable explanation. 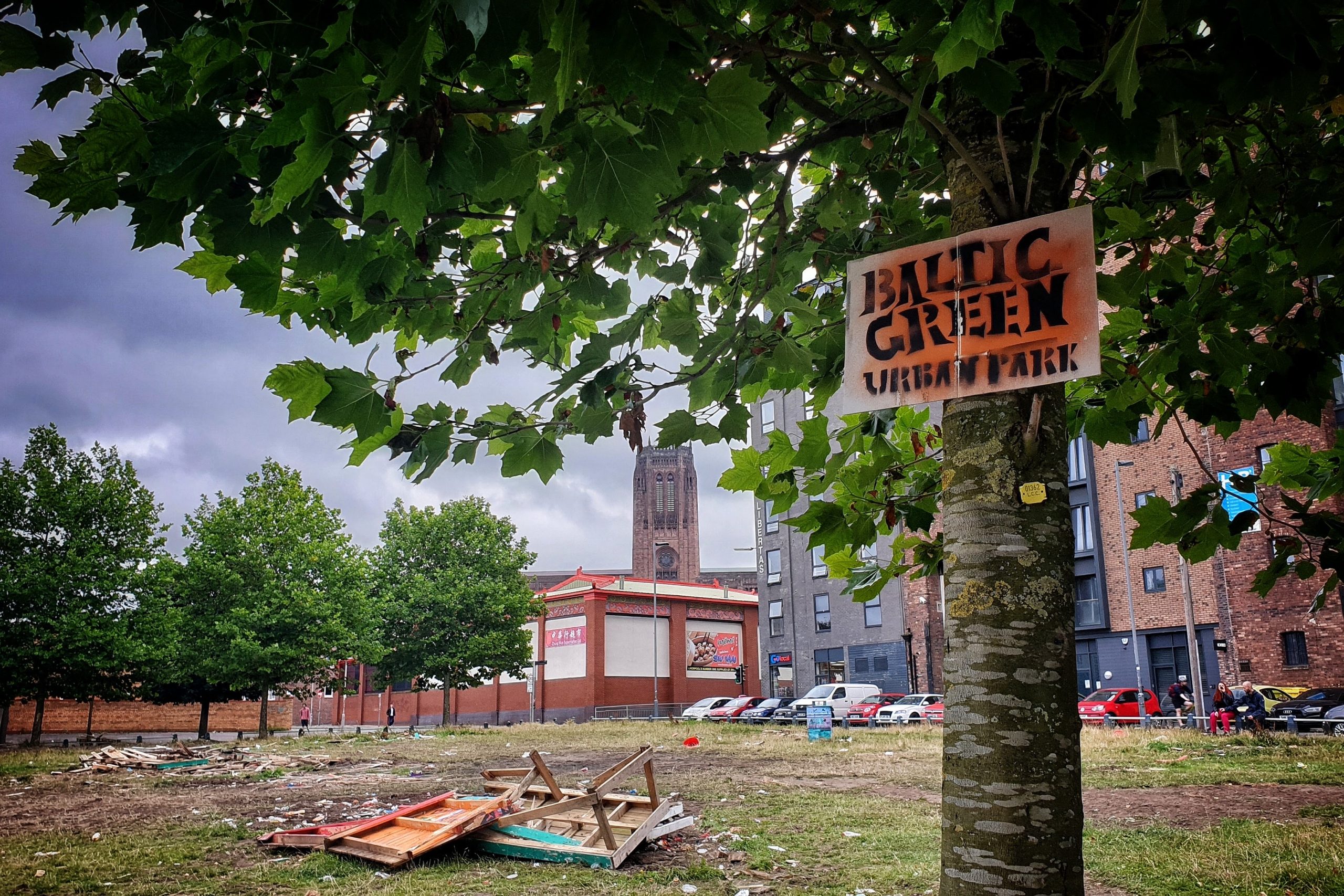 A number of people from all ages were very upset by the destruction – the uses the park had before were quite diverse, from residents taking their children to play and plant, to people just resting in the sun or enjoying their lunch. Was the space misused by noisy people at night leaving behind their rubbish? Not any more than any other space in the city centre. People willing to misbehave will do so anywhere.

Left behind is a site that does not resemble an interesting green space, garden or park. There is no playfulness, no invitation to rest. It is a site that has gone back from an invitation to build, plant and dream on 365 days a year, to only one possible use once a year – Bonfire Night!

Exciting Plans for the Baltic Green in 2020 Published by Baltic Triangle CIC 16.01.20

Baltic Green Urban Park is a labour of love for local community Published in Liverpool No!se 02.09.20

Liverpool’s newest park has thrones and a dragon built from pallets Published by the Echo 15.08.20