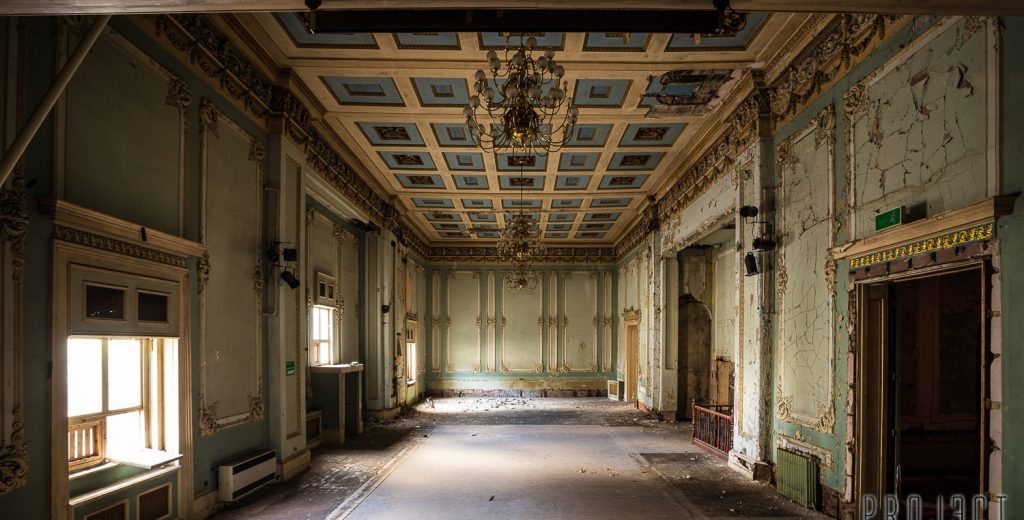 The image above (taken from PROJ3CT M4YH3M of Urbex.wtf) of the Wellington Rooms was the subject of a Public Consultation process today (21.03.18) held at the Piazza Cafe on Mount Pleasant. When I was there I witnessed a constant stream of people attending the eight-hour long exhibition. There was an opportunity to sign in and also to leave personal thoughts and comments. It was impressive and there were experts on hand to answer questions and guide visitors through the various options. The preferred option was undoubtedly the best option.

Also today (21.03.18) was the Public Consultation held at the Exhibition Centre, Kings Dock, to look into the problem caused by the extensive fire that destroyed the Liverpool Waterfront Car Park that serves the Arena and Convention Centre. It was a six-hour process that during my time there was sparsely attended. Though the experts on hand were helpful the whole event was surprising in that there were no options to consider only one proposal to build a new car park on the site of the already submitted planning application for Asif Hamid’s Contact Company call centre being proposed in conjunction with YPG Developments (PlaceNorthWest: 12.09.17). Even the LCC officer present stated that he had no idea of any pre-existing application for the same site. There was no opportunity at all to express views and no attempt to sign in the people who attended. The Mayor publically said he wanted to get the views of residents (The Business Desk: 21.03.18) but that won’t be happening from this event. The feeling I was left with was of being steam-rollered into one option with no available details about the costs entailed or engineering requirements involved in repair of the existing car park. This left a huge number of questions rather than any satisfying answers. Finally we had been promised in the Kings Dock Master Plan an iconic building that would greet visitors to the site and contribute significantly to the visitor economy of the Waterfront. Instead we are now offered a car park – whatever the architects might protest about the quality of their design, it is simply a car park and the present one is hidden behind The Block apartments and this proposed one is in full view of everyone in the most prominent position on Kings Dock.

This event took place on Monday (19.03.18) and was first advertised on the City Council’s website Liverpool Express 16.03.18 that is three days before the consultation commenced. As a way of doing civic engagement this leaves a lot to be desired. I was unable to attend at such short notice so am unable to comment on the proposals except that Engage has encouraged the Council and the BID Company to think about this possibility about 4 years ago during a seminar series Liverpool On The Move 2014 when we looked at the potential for a shared-street approach to Bold Street. There is an on-line consultation that continues until 30th March on LCC Better Roads webpage click to take part.

This consultation commenced on 23.02.18 and runs for two months and is being organised by PlacEd and is by far the most appropriate consultation process taking place in the city centre at the moment. There are many ways to take part and there appears to be no rush – giving residents many opportunities to get involved. There are still two more events in the square on 23rd March and 17th April about the proposals. I attended the event on 23rd and had a really good experience talking with the PlacEd staff who were available the whole time talking with people who dropped by. It was creative and engaging and there were many opportunities for sharing ideas and dreams about what the square might look like in the future.

Engage has promoted each of these consultation events as soon as we discovered they were taking place and we recently sent an email with their details to all on our mailing list. During the time of the previous two Directors of Planning Engage was always involved in the consultation process and was able to offer advice about how to conduct appropriate civic engagement and support in running successful consultation processes. Sadly this is no longer the case.