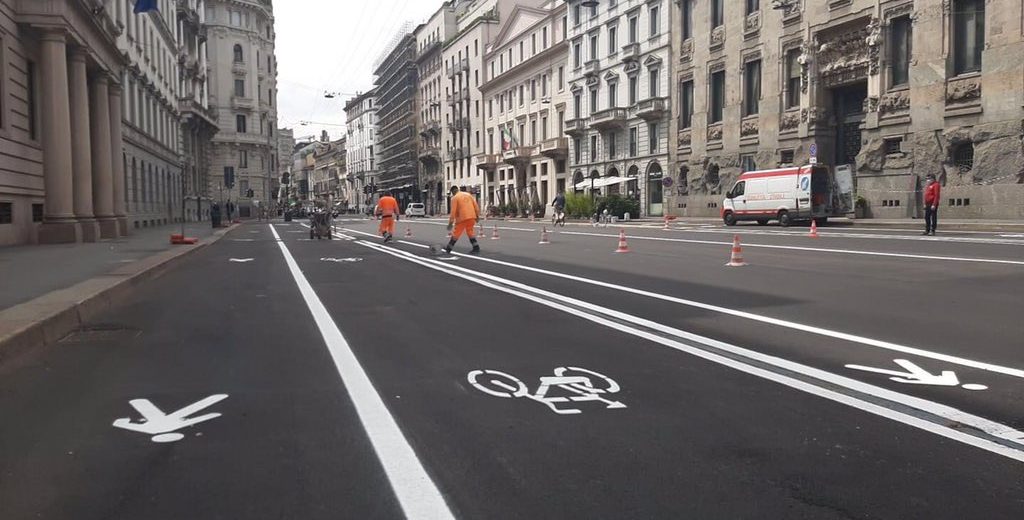 Things are changing rapidly in our city as we respond to the easing of lockdown and one very welcome change is the introduction of temporary cycle-lanes which are being started now and should be ready by the weekend to support more people to cycle into work from next week. There will also be the widening of pavements to allow social distancing as people walk around the city. You can read mote about this developing situation below:

Here is something we can learn from Salford immediately: #SafeStreetsSave Lives project about getting citizens involved in designing the streets of Salford for better walking and cycling.

Bristol’s Mayor has responded quickly to the pandemic by suggesting big changes to the city centre:

An active published 12mths ago in the USA makes clear that protected cycle lanes save lives. It can be found on the very useful Streetsblog USA:

The article below was first published on 30th April 2020 but has now been overtaken by a new UK Government announcement on Saturday 9th May which will be referenced at the bottom of the original article. Engage has co-signed a letter to Liverpool City Council and other leaders in the City Region encouraging them to reallocate highway space for cycling and walking.

Read a copy of the letter, organised by Friends of the Earth, HERE

“The country-wide lockdown because of the coronavirus pandemic has resulted in a completely different reality on our roads – overnight! Far fewer cars, lorries and buses and plenty of space for cyclists and pedestrians and with clean air to breath as well! What’s not to like about that?

In Milan they have already decided that things will be different and better going forward. In a Tweet send out today 30th April 2020 Demetrio Scopelliti @demescope tweeted: “The revolution will not be televised, will be live. Today Milan has started the implementation of the #StradeAperte #OpenStreets project for low-cost temporary bike lanes and widened sidewalks.” We hope he doesn’t object to our using his image of the work being done on the streets of Milan.

What would it be like to have civic leadership that is progressive and unafraid to take a lead and make hard choices that will certainly bring criticism from some quarters but which in the long run will improve the quality of life for all citizens. Engage began this conversation in Liverpool back in 2014 when we brought to the city civic leaders from Copenhagen to share with us how they had made their city the cycling and walking wonder of the world. Liverpool on the Move  was the title of the seminar series that year and we revisited the issue only last year when we held a seminar entitled Cycling and Walking in the Liverpool City Region.

We are now in a new moment that is both tragic and frightening but the responses we have had to take to try and halt the spread of this deadly virus has shown us that things can be done differently and we also know how it is making us feel. A fantastic report was shared today (30.04.20) on the BBC website Future Planet called ‘Are we witnessing the death of the car?’ And there was  a great quote in it from Janette Sadik-Khan, a former transportation commissioner for New York City and principal with Bloomberg Associates, who is working with Milan and other cities on their “transport recovery” programmes. “The pandemic challenges us, but it also offers a once-in-a-lifetime chance to change course and repair the damage from a century of car-focused streets,” she says. “Cities that seize this moment to reallocate space on their streets to make it easier for people to walk, bike and take public transport will prosper after this pandemic and not simply recover from it.”

The Liverpool City Region’s Walking and Cycling Commissioner, Simon O’Brien has made an emotional plea in the Echo for us not to go back to ‘business as usual’ once the restrictions are lifted on movement and travel. ‘Calls for Liverpool ‘revolution’ to relegate cars from the streets after lockdown ends’ contains Simon’s open letter to leaders and residents to keep the changes that we are currently enjoying. He has our wholehearted support. Liverpool doesn’t have to be behind the curve, many of us aspire to be world-leaders in this area and the only reason we’re not is the apparent lack of vision of our civic leaders. Maybe they would have more courage and confidence if they felt that the majority of the public would be behind them. But we think it is also their job to take us the public with them by their inspirational leadership and forward thinking.”