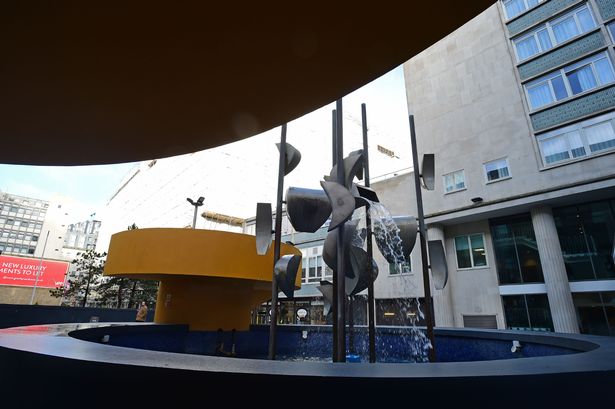 Recently there was a memorial event held at the Piazza Fountain in Beetham Plaza, Drury Lane, Liverpool – part of the UNESCO World Heritage Site and also the Castle Street Conservation Area. It was the 40th Anniversary of the death of the fountain’s designer and engineer – Richard Huws.

On a bitterly cold and windy day in February a few brave souls gathered to remember a man we have all come to admire who designed this remarkable and much-loved water sculpture. 27th February 2020 was chosen as the first commemorative event to celebrate the man who gave us the Piazza Fountain on 2nd May 1967. It was in August last year that the country finally acknowledged the worth of the man and the beauty and uniqueness of his work. So on 9th August 2020 we will be celebrating the first anniversary of the Grade II Listing of the fountain and it’s attendant viewing platforms when the Secretary of State accepted this amazing acoustic sculpture to be worthy of national recognition.

Richard Huws was born on 10th June 1902 and came to Liverpool from Wales and spent time at Cammell Laird Shipyard as well as the University of Liverpool’s School of Architecture where he was the school’s first engineer member of staff. The decision to remember the great man on the 40th anniversary of his death was made by the recently-formed Piazza Fountain Steering Group that was convened to protect the fountain in its current location and to raise the funds necessary to refurbish it, to make sure the burden of caring for the sculpture doesn’t fall entirely on the residents of Beetham Plaza, and also to create a culture programme to celebrate the acoustic structure and bring new generations to discover this extraordinary hidden gem at the heart of the city.

You can see the Programme of the anniversary event here, and read the Introduction here.

Present at the Memorial Event were members of the Welsh community, particularly singers from the Liverpool Welsh Choral Union and Bethel Chapel Choir. Poetry from Wales was also read out at the event: Poetry 27.02.20 and there was an intervention by former student of Richard Huws, Dr Robert MacDonald: Dr R MacDonald Intervention 27.02.20

The commemorative celebration was filmed and edited by Melissa Fields and the PA system was organised by Ben Murray and Oliver Evans from Total Control Sound.