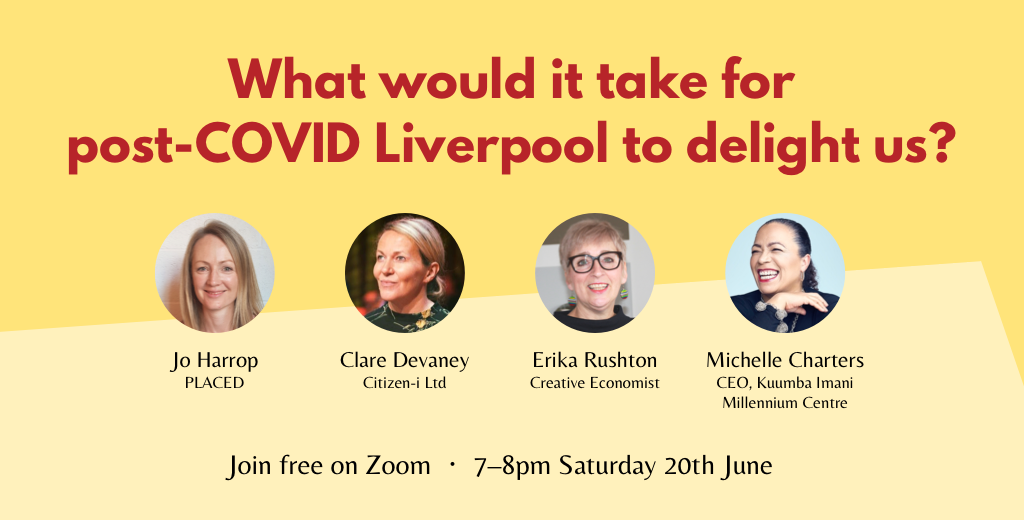 Engage has invited four local women to head tonight’s digital seminar which is part of a Cross-Pennine conversation under the umbrella of The Delightful City exploring what it would take for a post-Covid city to delight us. Below we profile some of the activities with which these women are involved:

Erika started out as an artist and worked within the social housing sector where she became experienced in the area of social inclusion, economic growth and place based regeneration. During her time leading Baltic Creative CIC she promoted creative, digital and cultural entrepreneurs. Erika then founded The Beautiful Ideas Co investing in innovation and enterprise and has recently become part of Kindred supporting socially-trading organisations as part of Power to Change working with the Liverpool City Region CA.

Jo began working in regeneration, project management and education which enabled her to develop a significant experience of working with diverse stakeholders and communities to understand the complex issues they were facing within their neighbourhoods. It was this experience which motivated her to try a new approach and establish PLACED in 2011, a Social Enterprise that works to engage communities, in particular young people in the built environment and where she remains the Director to this day.

A community activist for over 40 years with an unrivalled reputation in her community and across the city for empowering people and being a major champion for equality and diversity. She is the CEO of Kuumba Imani Millennium Centre and also the founder of L8 A Better Place. Michelle has spent her life working in community development and engagement.

Clare is a researcher, strategist and communicator, and also founder and Director of Citizen_i Ltd promoting citizen-led research, innovation and impact. She is a writer and political commentator as well as having an impressive track-record researching at major universities and national institutions. She is passionate about the role of cultural heritage in promoting civic innovation leading to a new and holistic economic paradigm. In Liverpool she is currently working with local neighbours in the LoveWavertree project.

A Sense of Place Blog about Love Wavertree by Ronnie Hughes