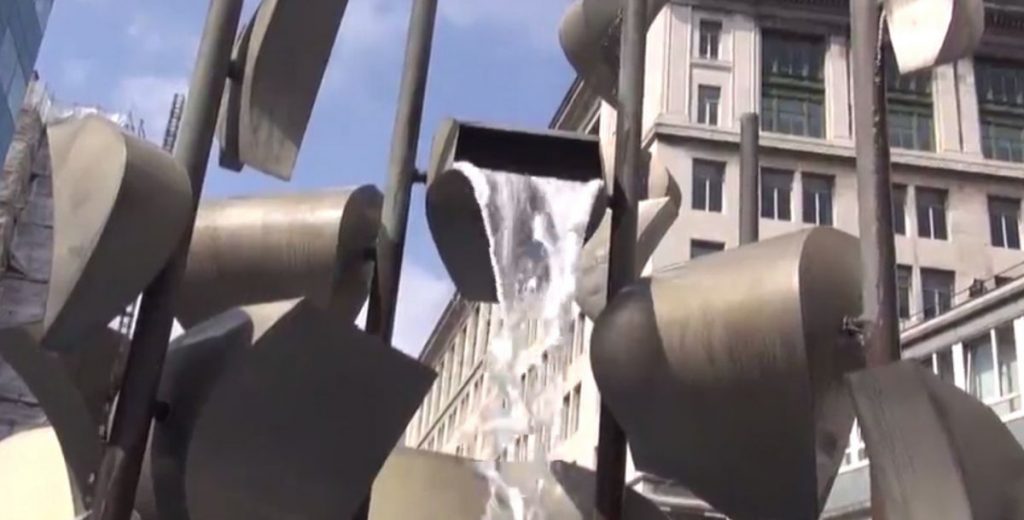 This is simply fake news...

You have to wonder why the Elliot Group continues to publish untrue information, which is really fake news, about the purpose of the popular Piazza Fountain (or Bucket Fountain)? So we will continue to challenge their statements with the real story and evidence it with proof that we are promoting the facts and the whole story about this much-loved fountain and it’s creator.

This fountain is NOT celebrating the Tryweryn scheme, as the Elliot Group claims, for bringing Welsh water to Liverpool. We have said before and we will say it again that Richard Huws was a Welsh Nationalist who opposed the water transfer scheme and refused to let his water-sculpture be in any way connected with that event.

The evidence can be found in the public minutes of the Merseyside Civic Society (MCS) Fountain Sub-Committee (FSC) 1962-1967 Papers held at the Liverpool Record Office (LRO). Here are some notes that were taken in the LRO at Central Library on 7th November 2018:

Mr Wilson [Colin.R. Wilson ARIBA of Messrs Hall, O’Donahue and Wilson, Bluecoat Chambers] outlined his idea; a large fountain to commemorate the completion of the Treweryn scheme. This as a focal point for a new pedestrian precinct.

“Mr Parker [J.R. Parker, B.Arch, ARIBA of Messrs Nelson and Parker] mentioned that Mr. Huws of the Liverpool University School of Architecture had been responsible for the very successful fountain on the South Bank during the Festival of Britain in 1951, and it was agreed that he should be approached informally by Mr Parker and his views on the proposal ascertained”.

Mr Parker reported on his meeting with Richard Huws.  He was delighted to design a fountain for Liverpool, but as a principal opponent of the Tryweryn scheme he would not want the project to celebrate its completion.  The Committee agreed this need not be the case and that a fountain to celebrate the opening of the proposed precinct was equally appropriate.  “It was therefore agreed that the Chairman should write to Mr Huws inviting him to submit a design for a fountain costing about £10,000” – which RH thought was a realistic figure.

Our comments on those notes:

Whilst a student Richard Huws developed his interests in the Welsh Nationalist movement, became a founder member of Plaid Cymru and designed the party’s first logo, the ‘Triban’. Although he later left the party, considering it too insular, he clearly would not want to be associated in any way with this highly controversial scheme to flood the Tryweryn valley and the village of Capel Celyn, in Gwynedd, to create a large reservoir for Liverpool.

That the sub-committee accepted Richard Huws’ objections so readily indicates the extent to which the MCS were far more concerned with securing this particular designer and a fountain comparable to his 1951 Festival of Britain mobile water sculpture, than to commemorating the completion of the Tryweryn scheme – as Colin Wilson had originally proposed.