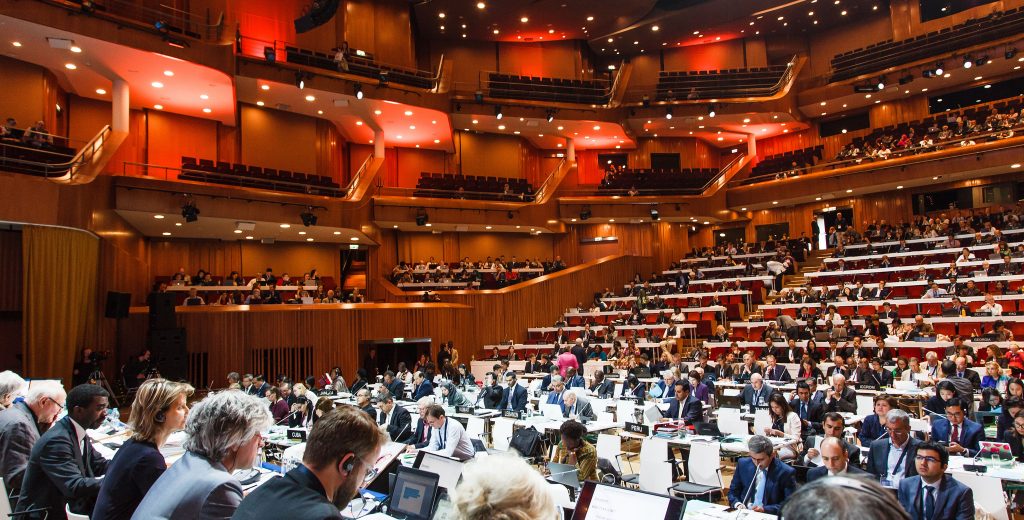 Unless big changes Liverpool is out next year says UNESCO

The motion put today to the 41st Session of the World Heritage Committee in Krakow was approved without amendments which mean we have until February next year to make the changes required by UNESCO WHC or we will be de-listed at the 42nd Session.

The debate was streamed live by UNESCO and can be watched here:

Liverpool was debated on Tuesday 4th July at about 3.00pm for 45mins. The Lord Mayor of Liverpool (Cllr Malcolm Kennedy) sat next to the State Party spokesman from the UK Government (Keith Nichol, Head of Cultural Diplomacy at DCMS) as he read out his statement. Sat behind them was Helen Maclagan who is Director (Culture) at UNESCO UK and Henry Owen-John, Head of International Advice, Historic England.

This was after UNESCO Secretariat’s Chief of Europe and North America (Isabelle Anatole-Gabriel) and ICOMOS (Prof Richard Mackay) had spoken first to make their reports. Engage’s chair had spoken with ICOMOS and members of the Secretariat  during the reception following the Opening Ceremony in Krakow on Sunday 2nd July 2017.

The following Committee members spoke about Liverpool: Portugal: absence of any progress, State Party not responding to concerns, does UK want to save this property? Lebanon: Will there be any changes to the plans that have been passed? No I think not. This looks irreversible, we will be forced to delete Liverpool. Finland: the DSCOR is unacceptable, the State Party is at fault here but is there any hope? We want there to be. Republic of Korea: Economic sustainability is important for every country and city and can be done whilst respecting Outstanding Universal Values. The State Party has not responded adequately. Turkey: No improvement despite our deep concerns over many years. They should be de-listed if the State Party cannot show it can manage the property properly. Philippines: State Party is not respecting the WHC, we should stop delaying the inevitable and remove Liverpool now. Jamaica: this is very serious and the State Party needs to take urgent action now. Poland: Urban pressure is a common problem and cities need a wise regeneration policy. No solution seems possible here yet something must be done.

UK representative spoke next in response and said there was cause for optimism as we had a recent election and a new Heritage Minister (John Glen MP, Salisbury) had been appointed who would sort it all out! The UK Government (State Party) would make protection of the Outstanding Universal Values its major concern. ICOMOS then responded saying good words but we weren’t going to hold our breath. He stated very clearly how pleased he was to note the involvement of civil society people who had traveled to Krakow to plead for Liverpool.

A resolution was put forward to UNESCO WHC by Engage and adopted unanimously by the participants at the World Heritage Watch Forum: WHW Krakow Resolution Liverpool

Then Engage was invited to speak and a friend of ours (Kate Fielden from the Stonehenge Alliance) read out a statement we had prepared earlier:

You can read it HERE: WHC Liverpool Intervention 04.07.17

Or watch and listen HERE:

Liverpool WHS problems were reported on BBC R4 Today Programme this morning – at 2hr.53min below:

You can read the article about this from Liverpool Confidential HERE

You might be interested in attending the Engage Seminar Series entitled Liverpool UNESCO WHS – A Status Worth Fighting For? You can find out more HERE.