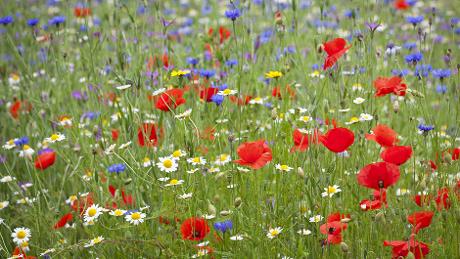 There was a site meeting at City Quay on Thursday 8th October, with Richard Scott, Senior Project Manager with Landlife at the National Wildflower Centre (NWC) in Knowsley.

As a result of extensive conversations about the possibility of planting some wildflower meadows along Riverside Drive it was agreed to form a partnership between City Quay and the National Wildflower Centre (NWC) and in particular their award winning project the Kew Grow Wild England Flagship site award: A Tale of Two Cities – Liverpool and Manchester Grow Wild Together.

It is very good news that the NWC wants to work alongside residents at City Quay if they decide that they want to explore turning over part of the external grounds at City Quay to grow wildflowers. In a recent survey of residents undertaken by knocking on every door on the estate 92% of those asked said they wanted City Quay to become more attractive to wildlife and also to have a greater diversity of flowering plants.

A Public Meeting is being held on Monday 12th October at 7.00pm in Casemate No5 with Richard Scott attending that will discuss these and other issues about the grounds and water feature at Ellerman Road.

You can watch Richard speak about the Project in the video below: