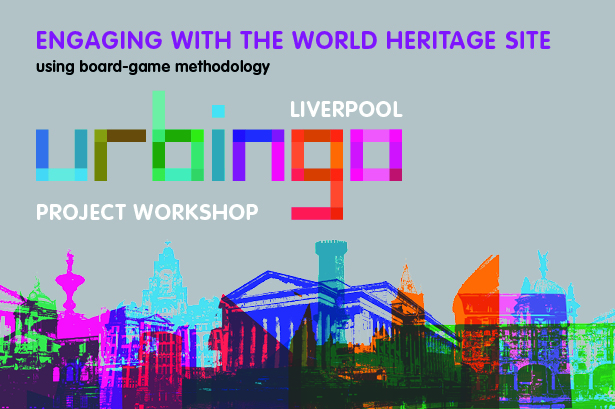 Engage has completed a series of Workshops directed and led by Jekaterina Lavrinec from Vilnius, Lithuania who has been working on gaming as a way of civic engagement and community development. This is the first time the Urbingo project has been brought into Western Europe and translated into English.

Our latest news is that we have submitted an Application to the National Lottery Awards for All (February 2019) to take the Urbingo project to completion and ready for publishing. There is a lot of interest among different groups in the city and once we have more news we will let you know. Below is the original article we published back in December 2017:

This project is a commitment on the part of Engage (and therefore City Centre and Waterfront residents) to make a significant contribution to the appreciation and valuing of the UNESCO World  Heritage Site before it is lost! It compliments the 2017 Seminar Series ‘Liverpool World Heritage Site – A status worth fighting for?’

The game is being developed by an enthusiastic group of volunteers who worked together during the 4 days of the Workshops from Wednesday 30th August to Saturday 2nd September 2017. There were 3 sessions a day from 10.00-12.00, from 2.00-4.00 and from 5.30-7.30. Starting from scratch the volunteers began to take photos of the  WHS areas and write text as well as working out translations from the original rules and recommendations.

By Friday afternoon the first prototype had been published and on Saturday the game was tried out using the cards and map produced during the workshops. The next stage was about to begin. Having made a good start with the Merchants Quarter there is now a need to complete the Cultural Quarter, Commercial District and Waterfront.

Engage Liverpool continues to develop this project and after a break for Christmas will re-commence workshops in the New Year.