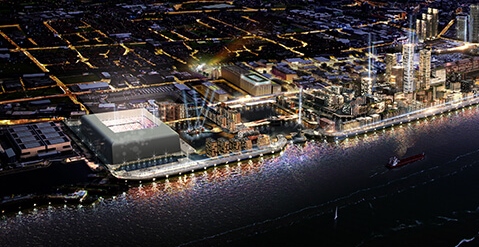 Denise Barrett-Baxendale, CEO of Everton FC, was speaking about the plans for the new stadium at Bramley Moore Dock at the MIPIM conference in the South of France. She stated that the new stadium would be built within the next 5 years. She revealed that following the massive public consultation process in which 20,000 people took part 95% of them “were in support of the move to Bramley Dock”.

Engage encouraged people to take part in the process as a previous article (below) on our website indicates. In the reports that have been published so far no mention was made of the UNESCO World Heritage Site and the challenges this development would be to the WHS status of the city.

You can read more about the intervention of Everton’s CEO below:

Everton Football Club announced yesterday that they are to mount a massive public consultation process to get the city behind their proposals for building a new stadium on Bramley Moore Dock in the UNESCO World Heritage Site.

The Echo article (see below) states clearly that they will have to fill in the dock to make the site ready. It has been made clear to the planners and architects, as well as the owners of EFC, about the need to protect and preserve the Outstanding Universal Value of the site which states not only that the dock infrastructure needs protecting but the water space too in order to make clear for future generations the legibility of the site as a former dock area. That means we must see what the space looked like in order to appreciate the sheer size of the commercial operation that gave rise to one of the biggest dock systems anywhere in the world.

Sadly much of our dock system has already been filled in both on this site as well as in the south dock system. And they cannot be replaced once drained and filled in. Obviously if you own the land then the water is ‘dead’ space and unlikely to bring in the kind of profits or return on investment that land is likely to do. Also the city badly needs regeneration projects. There will therefore be a lot of support behind this consultation process and it is designed to promote to residents the value of developing the site for much needed jobs, housing and regeneration, especially for the local community in the north-end.

But in this process how many will care about the impact this will have on our UNESCO status? Will there be anyone to defend our heritage? How will the general public hear the whole story about the site and understand the importance of these last remaining dock spaces to the future of our city? Sadly it is a fact that the Echo refused to print anything about the UNESCO visit to the city in 2017 that Engage had arranged during our seminar series entitled Liverpool UNESCO World Heritage Site – A Status Worth Fighting For?

The campaign will commence next month and anyone who cares about our WHS will need to be alert and involved. No one is against a new stadium for EFC but some would want to suggest that the WHS and Bramley Moore Dock is not necessarily the best place to site it.

You can read more about this debate below:

Let us know at chair@engageliverpool.com or on Twitter and Facebook what you think ought to happen during this consultation period.

PUBLIC MEETINGS IN LIVERPOOL ONE: