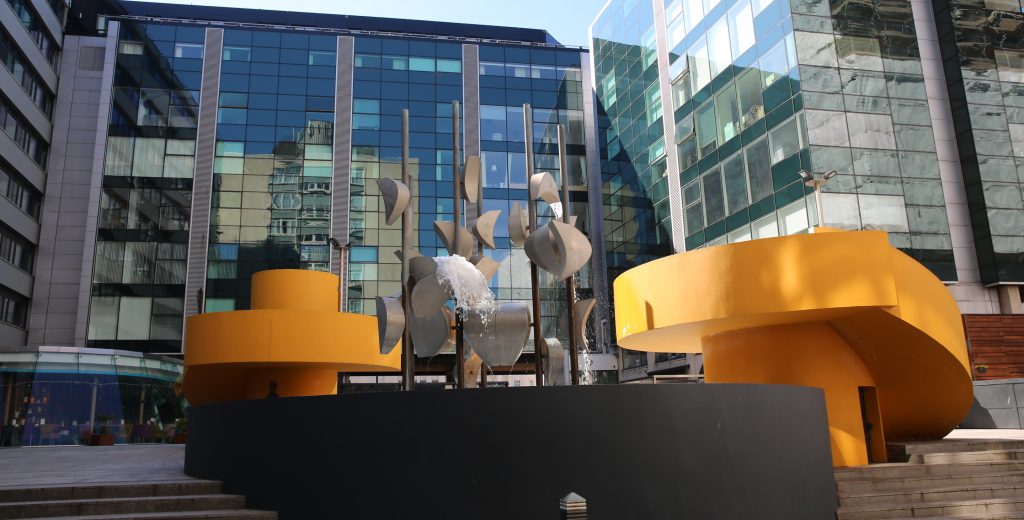 Historic England wrote to inform those who had campaigned for the Listing of the Piazza or Bucket Fountain in Beetham Plaza that the Secretary of State had agreed to it being listed as a Grade II Monument. It was a really important event and a fabulous decision which now protects not only the Richard Huws Fountain but also the two viewing platforms designed by him and forming a complete unit with the water sculpture.

I am writing to inform you that we have been considering adding the above building to the List of Buildings of Special Architectural or Historic Interest.

We have taken into account all the representations made, and completed our assessment of the building. Having considered our recommendation, the Secretary of State for Digital, Culture, Media and Sport has decided to add Piazza Fountain, including associated viewing platforms to the List of Buildings of Special Architectural or Historic Interest.The building is now listed at Grade II.

Please click on the link below to download a copy of our advice report, which gives the principal reasons for this decision. The List entry for this building, together with a map, has now been published on the National Heritage List for England, and will be available for public access from tomorrow. This List can be accessed through our website.

Please be aware that the listing of the building took effect on the day that the List entry was published on the National Heritage List for England.

As of 25 June 2013, the Enterprise and Regulatory Reform Act (ERRA) has enabled a number of heritage reforms, including an amendment to the Planning (Listed Buildings and Conservation Areas) Act 1990 that provides two potential ways to be more precise about what is listed. Whether or not the new provisions have been invoked with regard to this building is explained in the Advice Report. A List entry that makes use of these provisions will clarify what attached and curtilage structures are excluded from the listing and/or which interior features definitively lack special interest; however, owners and managers should be aware that other planning and development management constraints might apply to these structures, and should clarify these with the Local Planning Authority. Further information is available on our website.

If you consider that this decision has been wrongly made you may contact the DCMS within 28 days of the date of this letter to request that the Secretary of State review the decision. An example of a decision made wrongly would be where there was a factual error or an irregularity in the process which affected the outcome. You may also ask the Secretary of State to review the decision if you have any significant evidence relating to the special architectural or historic interest of the building which was not previously considered. Further details of the review criteria and process and how to request a review are contained in the annex to this letter.

Following news of the announcement by Historic England the Management Company of Beetham Plaza, via Urban Evolution’s Managing Director, sent an email to all residents and leaseholders at Beetham Plaza which threatens leaseholders with a significant increase in their service charge to respond to the Listing. This feels like it is designed to not only pit residents against each other but also to encourage opposition to the siting of the fountain in that location. The email and its content is shared below and comments will be made further down this page:

We have now received formal notification that the fountain and its associated viewing platforms, have received listed status, following the very hard work and great effort of several Beetham Plaza residents, who formed a “save the fountain committee/group” and campaigned hard and indeed successfully in this matter.

I was aware of the potential that the fountain may be receiving listed status and I have been quietly making arrangements, in the background, that allow us to adequately meet our heightened responsibilities, in terms of the protection and maintenance of the fountain and its platforms, once/if listed status had been granted.

The fountain is in need of a scheme of maintenance and repair and special guidance will now need to be sought on how best we achieve this indeed, a full planning application is likely required.

There have been multiple reports of vandalism to the fountain over the past year, yobs have been congregating around the fountain and on its platforms especially of a weekend and evenings and multiple complaints of confrontational and threatening behaviour along with vandalism have been reported by residents and commercial tenants alike.

The platforms have been used by youths smoking illegal substances, agents have been maliciously added to the water, causing the water to foam and at the request of the “save the fountain committee/group, given that this very special application was ongoing, I agreed to drain the entire fountain, re-fill it with water and have it fully serviced almost immediately. It takes a full eight hours for the fountain and its buckets to fill again and this has had a, not inconsiderable, impact on the buildings water bill. There have also been instances of graffiti to the fountain.

All of these things cannot continue and certainly not now that the fountain is of listed status.

I cannot fully comment on the cost of planning applications required in order to complete the necessary maintenance and preservation works, I will be working with the local authority, who are preparing the relevant documents and notices required under the Planning (Listed Buildings and Conservation Areas) Act 1990 Buildings of Special Architectural or Historic Interest, once I have further information I will update each of you as to the levels of cost that will be incurred.

I can then also look to have quotes provided for all of the works deemed necessary and of course I will need to inform you of these costs also.

One cost that I am confident in, is that which will be incurred for 24 hour, constant security at Beetham, following this listing status having been successfully obtained. I have asked that the same company, who provided Beetham with Chris the concierge, to also provided a quote for this additional security, as it ensures that a level of continuity is maintained. Currently the best quote received has been £17 per hour. We have been back and forth, trying to get this cost down however, we are told that this is the best that can be offered for a SIA licenced security guard during the hours Chris is not on duty. Doing the quick maths, this will work out at roughly £80,000 per annum and will be added to the service charge budget, as will the other costs referred to above.

I am always reluctant to incur any additional costs to a buildings service charge requirements, especially when that building already operates at a high cost. However, in light of the listed status, these costs are now unavoidable.

Leaseholders at Beetham Plaza already pay towards the upkeep and maintenance of the fountain and have done so for over 20 years. There is absolutely no requirement to have 24hr security on site and it is strange that should be suggested when the Leaseholder at Beetham Plaza (Elliott Group) also owns the Grade II Listed Heaps Rice Mill where there is no 24hr security and indeed where the collapse of the roof is being allowed due to a failure to properly manage the building.

It is true however that the fountain needs to be effectively maintained and at the meetings of the Friends of the Piazza Fountain there have been calls for a separate fund to be established so that the residents at Beetham Plaza do not have to bear the whole burden of maintaining and repairing the fountain. There will now be calls for the fountain to be appropriately celebrated as the latest Grade II building in the city to add such lustre to an already magnificent array of listed buildings in the city centre.

The residents at Beetham Plaza are to be congratulated on their successful campaign to get Listed Building status for their fountain something which will certainly enhance the value of the site itself and also add to the value of their properties overlooking the Plaza. Now this wonderful piece of public art belongs not only to Beetham Plaza but also to the residents of the city as a whole and to everyone in the UK as it is now a nationally recognised monument which will need careful protection and promotion ensuring it remains fully operational in its current location for generations to come.

Engage comment: It is worth stating that there is no ‘battle’ with any developer as the owner of Beetham Plaza has always said he values the fountain as much as residents do. There is only a difference of opinion about whether it is in the right location. Public opinion and now national government both agree that the current siting is as good as it will ever get. If there is any ‘battle’ it is between council officers and the Planning Committee on one side and the developer and Mayor Anderson on the other side about whether the listing’s decision that the current location is the best one for an acoustic fountain can be respected in the face of a challenge to move it to other locations.

The complete and updated submission to Historic England can be read HERE prepared by Dr Richard Moore and published here with his permission (uploaded 22.02.20).