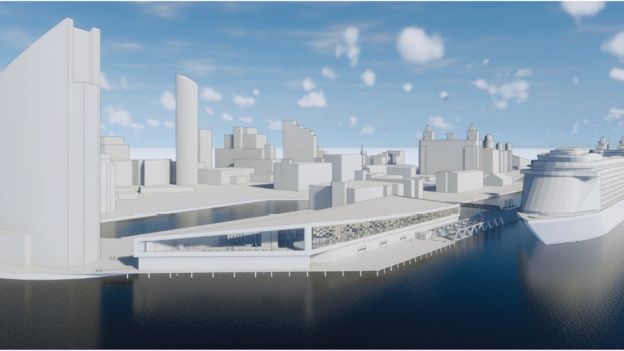 Liverpool’s world class Pier Head is set to receive a new cruise terminal, as part of a more than £100 million development plan, which should bring increased visitors to the city, as well as hundreds of new jobs.

The current temporary terminal—at the southern end of Princes Parade, just above the Royal Liver Building—serviced more than 60 vessels carrying about 120,000 passengers and crew, in 2017 alone. Cruise Liverpool, itself, recently celebrated its 10th year in operation.

The new terminal—which will replace the neglected Princes Jetty near Alexandra Tower—is designed to accommodate larger ships, carrying up to 3600 passengers each, as well as more frequent visits, up to 80 ships per year, and will include passenger amenities currently lacking from the temporary terminal, such as a lounge, café, toilets, taxi rank and vehicle pick up point.

Council officers have assigned the proposals as “acceptable in principle” and as in accordance with the National Planning Policy Framework, the Liverpool Unitary Development Plan and the city’s draft local plan.

The proposed location falls within both the Liverpool World Heritage Site buffer zone, and the Castle Street conservation area, but planners emphasised that a heritage impact assessment had been undertaken, and had demonstrated that “overall the authenticity and integrity of the WHS will be preserved”.

Historic England welcomed the plans, saying the new terminal would “continue a tradition fundamental to Liverpool’s history and worldwide significance”.

Critics of the plan have raised concern over the increased air pollution the larger terminal will bring to the waterfront – both during its construction, and later, through its operation. They note, for instance, that the plans do not include provision for shore-side power to be delivered to ships, which is a improvement other ports are eyeing up as a way to reduce the need for cruise liners to run their engines when in port.

Planners, however, have countered that nitrogen dioxide and particulates levels would be “insignificant” and would “not exceed nationally acceptable limits” for nearby residential blocks and businesses.