The Piazza Fountain in Beetham Plaza, Drury Lane, Liverpool is a wonderful acoustic sculpture and is loved and valued by thousands including many citizens of our home city. The time has come, to use a phrase made famous during the 2016 Brexit referendum, to ‘Take Back Control’ of this Grade II Listed monument. The public open space that is Beetham Plaza and the Piazza Fountain that is located there ought to be in public hands because they are not thought safe in the hands of the current leaseholder.

When the fountain was listed as meriting national protection and recognition one of the reasons given was that ‘”it typifies the 1950s/1960s policy of enhancing cityscapes through the incorporation of artwork in the public realm”. Its architectural merit was described as “a rare and important example of a mid-C20 kinetic water sculpture designed by the notable artist-engineer Richard Huws, and is his sole-surviving water sculpture”. Historic England went on to give further reasons for the designation as being “its unique design incorporating hoppers of differing size set at differing heights, and which tip unexpectedly, creates a dramatic visual and acoustic display by replicating the sounds and movements of a stormy and tempestuous sea; a particularly apt symbolism in the international port city of Liverpool”. The full List Entry on Historic England’s website HERE

Beetham Plaza and its Fountain now have the national protection that Liverpool City Council had until then failed to ensure by actively encouraging and facilitating not only the removal of the fountain but also the complete loss of the public space (see Elliot Group Press Release 09.04.19 where the leaseholder stated that discussions over the removal of the sculpture were “positive“) This was to be achieved by LCC signing over a long-lease on the site and then another one on the car park below the fountain and plaza to enable to developer to build a hotel. The leaseholder states in his Press Release that he “acquired the long leasehold on the site in the new year” (2019) which may refer to having control over both the plaza and car park. The relationship between the developer and the Regeneration Department of Liverpool City Council appears to have been “positive“. The leaseholder/developer and the Director of Regeneration were both arrested by Merseyside Police on 18th December 2019 “on suspicion to defraud, bribery and corruption” see article by Place North West 19.12.19. **

It will seem utterly incredible and unbelievable to many that the Managing Agent (Urban Evolution) appointed by the developer/leaseholder has made the following statement in a recent email to the residents of Beetham Plaza 20.03.20:

“The fountain has been mentioned as I have the council crawling all over me to prevent vandalism and graffiti to the protected bleeding monument that nobody has ever given a damn about until they thought the freeholder may build on it … The bloody thing is an eyesore and a wholly unnecessary expense to all.”

It needs to be said that current incidences of “vandalism and graffiti” at the fountain are grossly exaggerated by Urban Evolution.  The overlooking of the piazza by Beetham Plaza and Strand Plaza apartments, StayCity aparthotel and two restaurants on all sides and the financial stake of the Beetham Plaza residents probably now make it one of the safest and best places for the fountain anywhere near the city centre.  You can read the Police Report ASB Drury Lane and see that there are no concerns at all about anti-social behaviour at the fountain which is no worse than other places in the city centre.

Also it isn’t true that “nobody has ever given a damn about (it)” because there was an excellent restoration of the fountain and plaza from 1997-2000 and if there was any truth in the statement why have 4350 people signed the petition to protect the fountain, see The Voice of the People  (Engage website 06.04.20)?

Of course Urban Evolution are mistaken again when saying that their boss is the “freeholder” – he is in fact only the leaseholder as Liverpool City Council remains the freeholder of the plaza and fountain (Land Registry shows that the Freehold Title No. MS657037 covering the Piazza Fountain is still held by the Liverpool City Council).

They also say that no-one  cared about the structure until Elliot Group decided they wanted to “build on it“. The truth is that it was first proposed, by a group of architects who were students of Richard Huws, to get the fountain listed on the 15 September 2018, well before anyone first heard in late December 2018 of the possibility that the site could be built on and before this was confirmed by the developer on the 23 January 2019.

Many of us politely disagree with Urban Evolution’s comment that this Grade II Listed sculpture is “an eyesore“. Perhaps it ought to be said again that the reason Historic England recommends that structures are listed as worthy of preservation is not because they are aesthetically pleasing, but because they are of architectural and/or historic interest.

As a result of being shown this email by leaseholders at Beetham Plaza (and also a previous email of 10.08.19 reported and quoted in this article HERE) Engage decided that we should step up our support for the residents and launch with the Friends of the Piazza Fountain a new petition to take back control of the fountain and put it into public ownership once more. So we are asking everyone who wants to see the Grade II Listed water sculpture protected and preserved, repaired, restored and maintained for future generations to call upon the Chief Executive Tony Reeves and the Labour majority councillors in the City Council to return the fountain to public ownership immediately allowing it to be refurbished, appreciated and celebrated once again for the amazing national monument that it has always been.

Liverpool City Council has already shown sympathy for a change to public ownership when following the listing the Regeneration and Sustainability Select Committee passed a motion on 12th September 2019 requesting “that the Council explore options with the owners of the land, local councillors, residents and interested parties such as Merseyside Civic Society, for how the Bucket Fountain can be preserved and maintained; if appropriate by the creation of a specific local trust which could take the ownership of the land and fountain for posterity“.

It is worth noting here that the only other “Bucket’ Fountain in the world still operating is a less sophisticated structure in Cuba Mall, Wellington, New Zealand. It was built two years after Liverpool’s was inaugurated, in 1969 and has been maintained since by Wellington City Council and they renovated it in 1980, 1998 and 2003.

Liverpool’s Piazza ‘Bucket’ Fountain was renovated from 1997-2000 by Michael Cosser of Brock Carmichael Architects and BCA Landscape commissioned by the Beetham Organisation after whom the plaza was renamed from the Goree Piazza.

In these difficult times the Friends of the Piazza Fountain are not looking for city council funds but for security of ownership – it is a public work of art and ought to be in public hands. The group along with the Piazza Fountain Steering Group are exploring grant funding options to support the restoration of the fountain in its current location.

Also it needs to be said clearly that the leaseholder, through his appointed Managing Agent Urban Evolution, is using this to cause significant distress and expense to the leaseholders and residents of Beetham Plaza by considerably raising their service charge under the pretext of paying for the upkeep and security of the fountain. Public ownership would immediately lift the unacceptable burden and unjust requirements now being placed upon the shoulders of these unfortunate people. There are a number of citizens who have already stepped up to the bar to offer their support to ensure for all time and for all generations to come a fountain that will work as it was always intended.

Image below of the Bucket Fountain, Wellington, New Zealand: 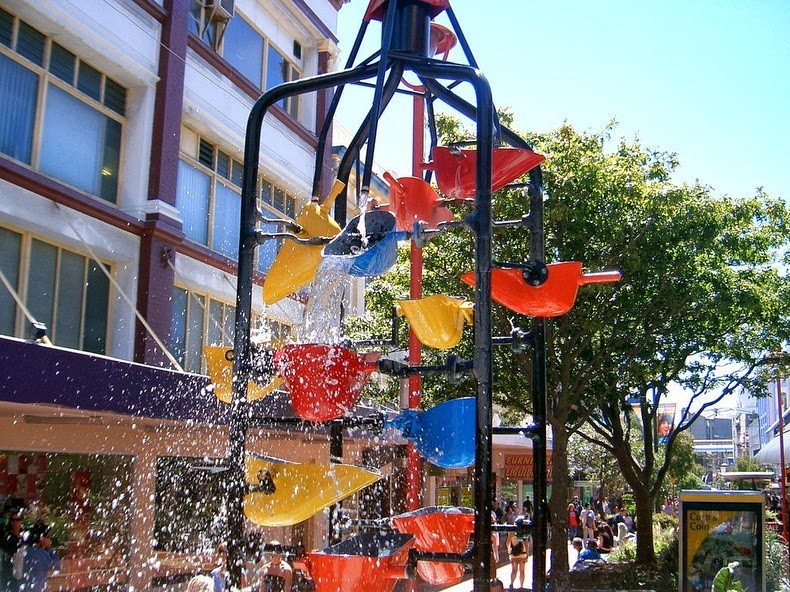 ** The latest on the legal situation of the leaseholder of Beetham Plaza and the Fountain is found in this article from The Business Desk 29.04.20