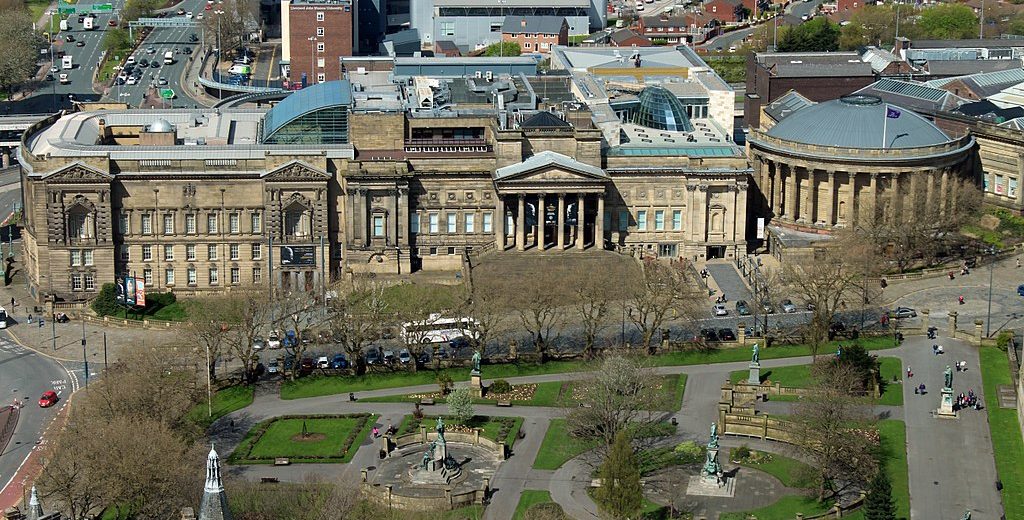 City Centre and Waterfront residents have been commenting about the controversy surrounding the plan to build a Zip World UK attraction right into the UNESCO World Heritage Site and Conservation Area of the Culture Quarter landing its riders onto the roof of the Grade II* Listed Central Library.

Scroll further down this article to find details.

Many residents were initially encouraged by the Open Letter signed by a large number of concerned national and local figures only to be surprised days later by a new campaign launched in support of the project from local businesses organised by Frank McKenna of Downtown in Business and PR company ThisGeneration run by Daniel Hughes. Sadly this appears to want to pit residents against businesses and seems to be promoting a divide-and-rule approach to civic life. One of the signatories was the CEO of the Liverpool BID with whom Engage has always tried to work alongside. Residents are not trying to oppose businesses in the city but feel they are simply stating that despite the permission given by the Planning Committee to the zip wires project some don’t think it is a good idea, feel it will irreparably damage the Culture Quarter and want to do what they can to protect and preserve the best that our city currently offers to locals and visitors alike. Many have expressed their amazement that such a campaign should be needed when those supporting the project already have all the political approval they need for it to go ahead?

A great surprise however was that when the list of businesses was first published one of the signatures was from the Liverpool Philharmonic. Many were shocked and disappointed and some we believe even contacted the Phil. Then it was noticed that their name had been removed from the list and didn’t appear in the Echo’s updating of that article whose words state “The list includes some of the city’s best known restaurants, shops, business organisations and cultural venues … every signatory is “right behind it” More than 100 businesses give backing to controversial zip wire project 29.07.20. Residents have asked did they give their consent to it in the first place or did they withdraw that consent for some reason later? It seems very odd that perhaps the most prestigious cultural organisation to have signed the letter suddenly was no longer associated with it. Some are already wondering if there might be others surprised to find their names on the list?

Those who have worked their way through all the zip wires planning application documentation in the public domain noticed that there was no Listed Building Consent application and this has surprised a number of planners, heritage officers and architects who signed the Open Letter calling on the Mayor not to use the permission he had been granted. Now Engage can report that replies have been received showing that the Council doesn’t believe it needs Listed Building Consent because the structure for the Zip World UK landing apparatus will be constructed on the roof of the new-build part of the library. However this seems to be an amazing judgement because it is the whole library that is Grade II* Listed and not just the Victorian parts. Surely this needs further investigation and the simple fact that the structure crosses through and lands into what is not only a Conservation Area and UNESCO World Heritage Site but also perhaps the most prestigious grouping of listed buildings in the city, means that the Council should apply for Listed Building Consent in order to protect this glorious heritage for future generations?

Update 12th August 2020:
IN RESPONSE TO THE ABOVE ITEM A RESIDENT HAS WRITTEN TO ENGAGE:

Listed building consent is not required for all works to listed buildings, but for works that would affect the building’s character as a building of special architectural or historic interest. There is therefore an arguable point either way for the zip wire, which attaches to the newer part of the building. I suspect that most Local Planning Authorities would play it safe and request a listed building consent application. Ultimately, this would be something for the courts to decide, if the decision was challenged.

However, the zip wire undoubtedly affects the setting of the library and of several other listed buildings, so this means that special statutory duties under the Planning (Listed Buildings and Conservation Areas) Act 1990 apply.

(1) In considering whether to grant planning permission [or permission in principle] for development which affects a listed building or its setting, the local planning authority or, as the case may be, the Secretary of State shall have special regard to the desirability of preserving the building or its setting or any features of special architectural or historic interest which it possesses.

(1) In the exercise, with respect to any buildings or other land in a conservation area, of any [functions under or by virtue of] any of the provisions mentioned in subsection (2), special attention shall be paid to the desirability of preserving or enhancing the character or appearance of that area.

The officers report or file notes should make clear how these duties have been met. Failure to do so can result in a decision being quashed.

(1) Subject to the previous provisions of this Part, the local planning authority or, as the case may be, the Secretary of State may grant or refuse an application for listed building consent and, if they grant consent, may grant it subject to conditions.

This would only apply where Listed Building Consent is required.

Clearly the Listed Building Consent issue is contentious, with an arguable case either way. But Sections 66 and 72 apply anyway and should have been addressed explicitly in the decision-making process.

On Sections 66 and 72 of the 1990 Act, the following statement by the Conservation Officer in the Planning Report states:

WE NEED TO TALK ABOUT CULTURE

As a direct result of the zip wires controversy some residents have been commenting on social media about what this says to us and to others about the kind of cultural offer for which the city wants to be known. It almost seems that we are so desperate that we will use anything to attract tourists to the city when visitor numbers have been rising year on year. Deputy mayor and cabinet member for leisure and culture, Cllr Wendy Simon, says the idea is to ‘boost visitor numbers’ and ‘provide a valuable income stream’ – but at what cost? LocalGov.co.uk 20.12.19

If any reader is interested in further supporting these ideas and adding to them we would encourage you to support those who are campaigning on this issue as Engage is simply hosting information as it comes into the public domain often via city centre and waterfront residents. You can email us at info@engageliverpool.com.

The Echo was running a survey to canvas local opinion HERE published on 30th July 2020. ECHO SURVEY RESULTS 07.08.20 HERE  Clearly Echo reporter Liam Thorp didn’t expect the answer he got as the result is embedded within the text and not in the headline, no one who is against the project is quoted and he concludes his report by making sure the last word is given to those who support the zip wires. 72% OF ECHO READERS OPPOSE THE PERMANENT ZIP WIRE (789 people took the survey). Updated on 10.08.20.